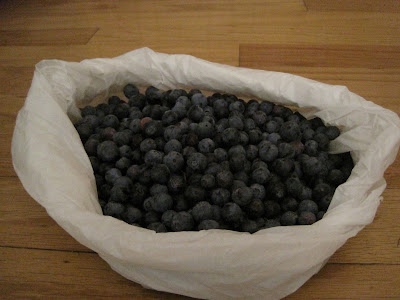 I recently went blueberry picking with a friend.  We went to our local blueberry orchard, Moorhead's Blueberry Farm.  The owner, Sid, told us that his dad started the place 35 years ago and he worked there every summer as a kid.  Now he owns it and works there every day during the season.  They don't use chemical pesticides or fertilizers which is a plus in my book.*

These bushes were fabulous!  Over six feet tall and loaded with berries.  In just 30 short minutes I managed to pick two and a half pounds of plump delicious berries.  As I was picking I was hearing parents with small children scattered throughout the field.  I laughed to myself as I remembered blueberry picking with my girls when they were little.  The three of them were more interested in eating the berries.  They would pick for a while, eating as they picked, and then when they were tired of picking they would come raid my blueberry bucket for handfuls of sweet berries.  Quite frankly I never managed to pick enough to satisfy three hungry tummies and have some for home.  I often had to go back without them in order to have a reasonable amount of berries.

I consider blueberries super-fruits, very high in antioxidants they are one of the few native American fruits.  I've written about some of their health benefits in the past.  New research appears to show that higher consumption of blueberries may be helpful in warding off conditions such as Alzheimers and Parkinson's as well as improving general cognitive function in aging adults.

Whatever their health benefits, no one can deny that they taste wonderful.  After my husband and teenaged daughter plundered the batch I brought home I had just enough left to make a gluten free blueberry coffee cake.  Obviously I'm going to have to go back for more....I guess some things never change.


Mix together all of the dried ingredients
Shred butter into flour mixture using the large side of a box grater
Mix butter into the flour mixture with your hands until the mixture resembles coarse crumbs
Add blueberries and chocolate chips and toss well to coat
In a separate bowl mix together yogurt, almond milk, egg, and extract, blend well
Pour liquid ingredients into dry ingredients and quickly blend together, do not overmix the batter
In a separate bowl mix together topping ingredients
Spread topping evenly on the coffee cake
Bake for 25-30 minutes until the top of the coffee cake springs back lightly when tapped
Remove from oven and cool
Serve warm or room temperature


*Sid did share that he uses roundup for weed control (obviously not on the blueberries) because it is  a short-lived weed killer.  I'm hopeful that he will consider switching to something else like vinegar which is shown to be effective.
Posted by Mira Dessy at 11:35 AM No comments: 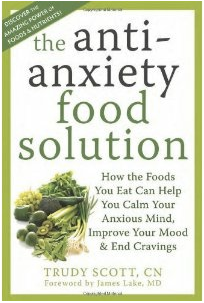 Written in a warm, reader-friendly style, The Antianxiety Food Solution takes the often undiscussed topic of anxiety disorders, brings them into the light, and offers solid, scientifically backed nutritional advice to help alleviate the symptoms.

Anxiety disorders encompass a wide range of conditions from generalized anxiety disorder (GAD) to panic disorder to social anxiety and more.  Often undisclosed by those who suffer from this sometimes debilitating range of disorders, anxiety can cause a wide array of physical symptoms due to the stressors, emotional toll, nutrient depletion, and the lack of proper diet.  The author herself a former sufferer of anxiety, brings the voice of experience to this topic in a caring yet straightforward way.

Diving right in to the topic, Chapter 1, Figure Out Your Optimum Antianxiety Diet, gives a step-bystep approach to proper nutrition to support the bio-individual needs of those looking to, as the sub-title says, calm their anxious mind, improve their mood, and end their cravings.  As part of the nutritional support offered in the book, the author gives very clear examples of what to eat and, just as importantly, what not to eat, even including examples of nutrient dense bonus foods.  The author then takes the subject a step further by including chapters on a wide range of conditions that may affect nutritional status and promote anxiety such as allergies, addiction, blood sugar imbalances, poor digestion, brain chemistry, hormonal imbalances, and lifestyle choices.  Throughout the book are a number of easy to understand self-scoring quizzes as well as tables which concisely illuminate the points the author is making.

One main premise of the book is the promotion of a clean, traditional diet, free from chemicals and additives, that is high in whole foods.  In another significant topic, the author explains how the use of amino acids can be highly beneficial for many sufferers of anxiety disorders.  Clearly highlighting the symptoms each amino acid deficit can cause, she then illustrates how to address these deficits and discusses how to consider use of amino acids to help regulate brain chemistry.  She then looks at a little discussed condition called pyroluria, a genetically induced anxiety disorder caused by faulty hemoglobin synthesis.  As little known as this condition appears to be it is easily treated with supplemental levels of readily obtainable nutrients; all explained by the author in very plain language.

The book ends with some solid advice about lifestyle and health changes that do not rely on medication, supplements, or nutrition, but are equally important to the concept of living a balanced, happy life.  Addressing sleep, exercise and support as an important factor in recovery.

Overall this is a book that should provide a very valuable resource for those who suffer from anxiety disorders or who have a loved one who suffers.  By following the advice in this book you will learn specific suggestions for avoiding those substances that can trigger anxiety and prevent a return to balance and wellness.  You will also gain a better understanding of and appreciation for the link between nutritional support and a balanced mood.

To purchase a copy of this book and for more information you can visit the website.  The book can also be purchased from Amazon.com or direct from the publisher, New Harbinger Publications, Inc.
Posted by Mira Dessy at 1:14 PM 3 comments:

Warning....rant ahead.  I'm so aggravated I cannot even tell you.  This morning I went to the grocery store for a few items.  One of them was grape jelly, requested by my daughter.  It's her favorite flavor.  Since we've moved away from Connecticut we no longer have the same access to wild grapes so I'm no longer making grape jelly.  The grapes that I've managed to find here in Texas have, for the last two years, been very thick skinned and dry due to the lack of rain so no grapes there either.  I did plant grapes in my garden but they're table grapes not jelly grapes so I'm not sure they'd work well.

My frustration?  NOT ONE SINGLE jar of grape jelly at the grocery store came without HFCS.  Several even had HFCS as the number one ingredient.  Seriously?  That number one ingredient means that the majority of the jelly isn't even grapes, it's HFCS.  That is insane.  First of all grape jelly is incredible easy to make.  Grapes are very high in pectin.  Throw them together with a little water, the right amount of sugar, heat to the correct temperature and voila! Grape jelly.  Even more upsetting to me is the fact that many of the grape jellies at the grocery store come with artificial flavorings.  I'm not exactly sure why as to my mind grapes have a pretty distinctive taste all their own.

Needless to say I did not buy any grape jelly (luckily she also likes orange marmalade so that's what she got) and I'm going to have to work a little harder to find a good source of either muscadines or concord grapes to start making my own jelly again.

For those who have access to good grapes for jelly making here's a great recipe from the book Preserving Memories: Growing Up in My Mother's Kitchen

.  In the interest of full disclosure I'll tell you that this book was written by my mom.  I'm not recommending it because she wrote it (honestly).  It really is one of my favorite canning/preserving books and my first go-to when I'm looking to make something.    To get all of the great commentary, hints and tips you'll have to get the book, but here's the recipe:

Posted by Mira Dessy at 4:46 PM No comments:

It's been very dry here in the Eastern Piney Woods of Texas.  So dry that there are now warning signs all over town about the potential for fire hazard.  Needless to say this is not boding well for my garden.  This is our third year here and each year we do a little bit better than the year before.  But we also spend a lot of time and energy moving things around trying to find just the *right* spot on our postage stamp-sized property.  We seem to have finally found the right spot for the tomatoes and they're producing faster than we can eat them which is a delicious thing.  If I start to get too many I make something my friend Libby calls Tomato Junk and shove it in the freezer ready to use at a moments notice for pasta dishes, salads, egg scrambles and more.

I've just gotten back from the store where I have purchased, yet again, a rosemary plant.  This is my fourth one of the season.  I had one last year.  It did pretty well.  We enjoyed using it in a lot of recipes, especially veggie marinades, last summer.  Then winter came.  It was a bad winter (for Texas) and many things in my yard did not make it.  One of them was that poor rosemary.  Okay, it happens.  So I went and bought another one.  For some reason it wasn't happy where the first one was and it died.  I bought another one and moved it to the bed across the way.  That one died too.  Then I bought another one and planted it in a pot with the lavender.  The lavender is still going but the rosemary?  Yup, dead as a doornail.

So I've bought another one (luckily they are just $4 a pot so I can afford to keep shelling out until I get it right) and I'm really hoping this one will make it.  I've got a different location in mind, a little more shade, hopefully a better location and nowhere near the areas where the others have not survived.

Along the way I keep being reminded that gardening is an ever-evolving process.  Especially after learning how to garden in one area of the country and then moving to a vastly different agricultural zone and temperate climate.  Learning what plant where

takes time and attention and effort.  Luckily most of what my husband and I plant in our garden seems to grow well or I probably would have given up by now.   I also like playing in the dirt and this certainly gives me an excuse to keep on doing it.  And it's a great way to get some sunshine and fresh air, something I recommend for everyone.

Since I mentioned it, here's the recipe for Tomato Junk.  There are no precise measurements, I just throw it all together but somehow it always works out.

a lot of very ripe tomatoes, washed, cored, peeled and quartered
a sweet onion, chopped
a clove or two of garlic, minced
a bunch of basil, minced

Remove from heat, let cool and then package for the freezer in 1 cup containers

I do not add salt or pepper to this as I season it when I use it
Posted by Mira Dessy at 1:28 PM 1 comment: