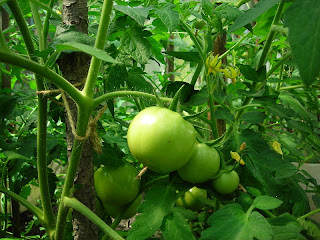 I was recently visiting family in the Northeast where they have been hit badly by the tomato blight. All over the area farmers and home growers are ripping out plants and throwing them away because of the blight. Although cherry tomatoes and plum tomatoes seem to hold up better they are certainly not immune.
When I went with my sister-in-law to her beautiful community garden plot everything appeared to be growing well. The garden was lush, greenly fragrant and productive, even the tomatoes looked good at first glance. But the blight had obviously damaged the plants and the fruit. As she began to pull out the plants I realized that many of the fruits were still unscathed. Remembering the years we lived in Vermont (which Shep Ogden, owner of Cook's Garden, jokingly says should be referred to as the Green Tomato State) I knew that there was a lot we could do with the fruit. My sister-in-law agreed to give it a whirl and we began to hunt for all of the un-blighted fruit we could find.
After the patch was cleared and we headed back to the house with bags full of green tomatoes we began to search for recipes. There are so many things you can make with green tomatoes; more than just the familiar fried green tomatoes. We usually don't use them because we are so conditioned to eating them when they are fully ripe. According to the USDA the nutritional profile of green and red tomatoes is almost the same. Green tomatoes have twice the vitamin C, more vitamin K, and more calcium. Red tomatoes have more vitamin A, E, and potassium. Apparently they have the same amount of lycopene and it is believed that the chlorophyll in the green tomatoes hides the red pigment which indicates a lycopene-rich food.
Our cooking and canning foray took two days (in part because we also canned zucchini, but that's another story) and we made green tomato cake, green tomato pickles, green tomato salsa, and some really fabulous green tomato relish. Now when their family sits down in the middle of those cold New England winters they'll still be able to have a jar of summer goodness on the table to enjoy.
Green tomatoes are versatile and can be made into pie (it's delicious, trust me), pasta sauce, and all manner of preserved goods. While I'm not sure if the farmers in those states affected by the blight will be able to harvest and sell their green tomatoes I sure hope they do. And I hope that people realize just how tasty green tomatoes are. Who knows, it might start a new demand for green tomatoes.
photo courtesy of wikimedia.commons.org

Thanks for this! I just harvested quite a few green tomatoes (and my toddlers helped me because they thought they were picking green apples). I was curious about the nutritional comparison and it's good to know we're still getting a boatload of vitamins in! We've done green tomato bread, green tomato cake; green tomato salsa and ketchup are next!

Let me know how that green tomato ketchup turns out, it sounds interesting.

Here's a recent recipe for Green Tomato Salsa from the New York Times. Sounds so yummy that I wish I had a large supply of green tomatoes. I may have to grow more tomaoes next year.